Phishing for Phools: The Economics of Manipulation and Deception by George A Akerlof and Robert J Shiller 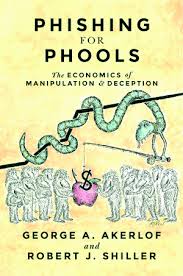 Imagine there’s a magic pill that enables shops to get you to spend more than you otherwise would. Fantasy?

Well, it exists and it’s highly likely you have it. It’s called a credit card, and here’s how it works. The credit card issuers charge large fees to merchants. The merchants in turn get the benefit of shoppers who buy more stuff. Consumers who pay for their shopping with excessively optimistic expectations of the money they’ll have when the credit-card bill arrives then pay high rates of interest, which are compounded with punitive fees for late payments.

This model of exchange isn’t described in economics textbooks but it describes the behaviour of many rational and intelligent people. Perhaps you even recognise yourself. And the empirical evidence from economics and social psychology is that people on average spend not just a bit more but a lot more if they have the vendors’ magic pill. It’s an instance, say George Akerlof and Robert Shiller, in this surprisingly readable yet highly original book, an instance of how “at each and every stage, the competitive drive for profits plays on our weaknesses”.

The authors are both Nobel laureates in economics. They don’t dispute the productive power of the market economy but they point to a pervasive feature of it that isn’t sufficiently recognised. The title of the book refers to fraudulent online attempts (known as “phishing”) to get passwords, bank details or other sensitive personal information from unsuspecting customers. Contrary to the idea that these scams are operated by rogues and afflict only the credulous, the authors maintain that similar behaviour is intrinsic to market economies.

Akerlof came to prominence as an economist by analysing the market for second-hand cars and what are known as “information asymmetries” between the buyer and the seller. The seller of a used car knows more about it than the buyer. In this book, he and Shiller explain in remarkably clear and accessible language how buyers are taken advantage of in this and other consumer markets. Their term for this exploitative behaviour is “phishing for phools”. Discussing the markets for used cars and house sales, as well as the routine use of credit cards, they come to a dispiriting conclusion: “Phishing for phools adds significantly to what we pay for cars and homes, which are the most expensive consumer purchases of our lives; and credit cards phish us to spend considerably more on a daily basis.”

Take just one aspect of the phishing behaviour in consumer markets, which applies to all of these examples: financing. If a buyer is quoted a lower monthly credit payment, then their attention may be diverted from an extension of the length of the contract. And a longer borrowing period inevitably means a rise in the cost of the loan.

You may think these examples are simplistic and that, being a canny buyer or investor, you wouldn’t be vulnerable: caveat emptor, as antiques sellers say. Yet the evidence and explanations marshalled by Akerlof and Shiller are compelling and they have profound political implications. As the authors are American, they concentrate on the power of lobbying to distort Congressional decision-making, yet their point has wide application. A proposal during the Reagan administration to compel the manufacturers of cranberry juice to label it as 75 per cent water was defeated by a handful of politicians — lobbying fees paid by the companies had spectacular returns in protecting their profits from better labelling.

What’s the answer? The authors maintain that, in the absence of regulation, people will suffer. Given the ingenuity that sectional interests invest in finding ways to circumvent regulation, it’s a continual effort to keep up with them. The authors give examples of belated regulatory reforms in food hygiene (recalling the public scandal caused by Upton Sinclair’s great novel The Jungle, in 1906, about conditions in Chicago meatpacking factories) and quack medicines. One 19th-century chancer unabashedly sold a panacea that included mercury, with numerous deaths resulting. And regulation may often lag the event, with terrible consequences, such as the financial crash of 2008 due in part to lax supervision of dodgy financial products.

It’s an enlightening read by two expert economists. It should be required reading for policymakers and for consumers (which is to say, all of us). There is a caveat, though. A large economic literature also explains the capture of regulation by vested interests, who include the public sector. It have been good to have more of a sense of this covered by Akerlof and Shiller in their important, sobering book.